One hour lectures fully supported by Powerpoint slideshows and video. Fact filled and superbly illustrated they are informative and entertaining.

Titles below LINK to lecture details - - link selected will appear immediately below this type block. 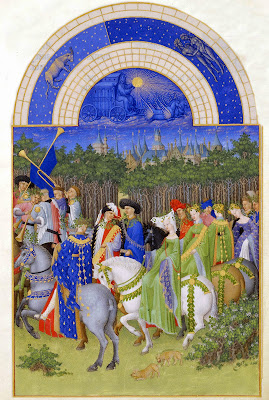 Summary:
How to contain a thousand years of art in one hour?
* Video - a unique LizPresents video (ca 18 mins + voice over) with a broad selection of manuscript illuminations and styles with explanations of context and content.
* Slideshow - an overview of the manuscript era in Europe:  manuscript creation from sheep to scribe to illuminator;  art in the margins;  and a closer look at some exceptional manuscripts.

The Medieval Manuscript is in a format known as a codex, put simply a fully handmade, hand written and illustrated book with covers and pages to turn whose origins date back to 2-400 AD.   They were replaced by printed books beginning in 1450 and their wild originality faded away over the next 150 years, although they continued, and continue, to be made as works of art.

The codex or book format's success was due to its convenience, portability, and easily displayed pages.  It became the norm when large volumes of text needed to be recorded.  [Scrolls or sheets continued to be the major format for bureaucratic and legal records.]

Into the codex was written - copied from other documents or from ancient scrolls - the knowledge and beliefs of the world. And it was these documents that helped bring literacy into the dark corners of the western world.  One wonders:  if the codex had not been so portable, so easy to display, so magically illuminated and enticing - and the early christians not so intent on spreading the word - then how much longer would the spread of literacy have taken?

Whether religious in content or not, the illuminations range from beautiful (as in the image at the top of this post) to extraordinary rampant displays of dragons, strange disfigured people, animals and hell.   All reflect the insecurity of medieval peoples who felt their world was constantly threatened by the devil, disorder and apocalypse.

But life itself DOES go on, and that's shown by wonderful 'cartoons' of the routines of life - work, entertainment and sex - a reminder that people lived, loved and behaved badly then just as now.

And it is in manuscripts that great art existed for centuries before it burst forth onto canvasses and walls.   Many artist of the early Rennaissance period (such as Van Eyck) were manuscript illustrators as well as artists...one explanation for their often extraordinary ability to describe detail.

The illuminations are frequently hard to comprehend - even scholars are unsure of their exact symbolism - why grotesque creature or mockeries of human behaviour right next to Christ?  Clearly 'we' cannot conceive of the medieval mind but we can see that the images are often sharp commentaries on the absurdity or immorality of man and always making the point that evil is ever present. Conjecture or guesswork about their meaning is what makes them so fascinating - and fun.  In the early intensively decorated manuscripts (such as Kells) the often incomprehensible illuminations and carpet pages were often MEANT to be so, reflecting on the mystery of God, in fact encouraging reflection...and that is true of texts from all beliefs.  Even the creation of the illuminations was considered a form of reverence.

High quality digitised copies on line are available from nearly all major libraries and museums.

For those who want to get a first hand look at MSS in the British Library, a list of documents shown at the lecture is available.  To learn how to access and view them - open link below for a mini tutorial
Link to How to Access Brit Lib Documents 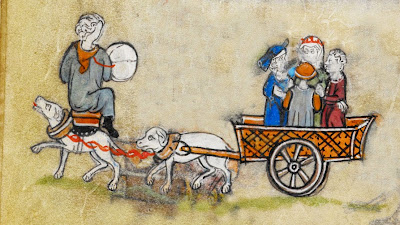 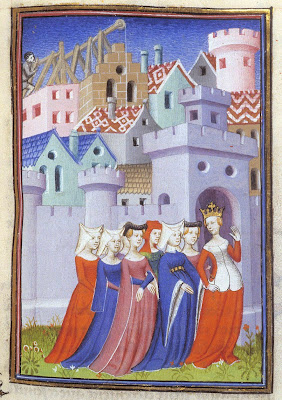 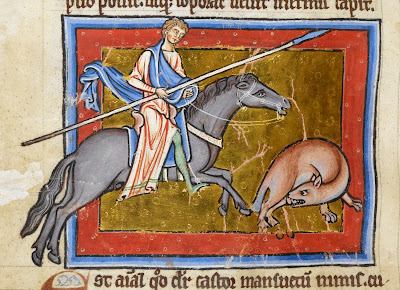 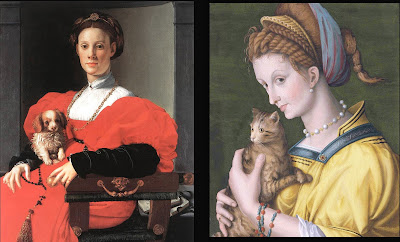 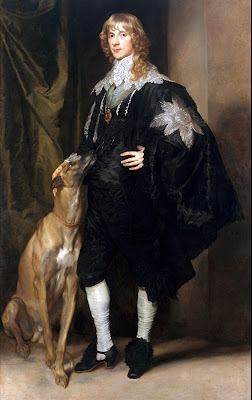 Summary
A virtual history of art with a focus on cats and dogs - each with the true story of an extraordinary four legged hero.

Our relationship with cats and dogs began, of course, for purely practical purposes - dogs helped in hunting for food and cats preserved our food from mice...and our appreciation of them rapidly turned into affection and admiration - as is shown in artwork dating back to ancient times.

And there are the heroes:   those critters who aided man in times of great danger, showing extraordinary loyalty and bravery - dogs often starred in this role, and somewhat surprisingly cats as well.

Dog-lover or cat-lover will learn something special about our best friends who have so faithfully been at our side for such a very long time... 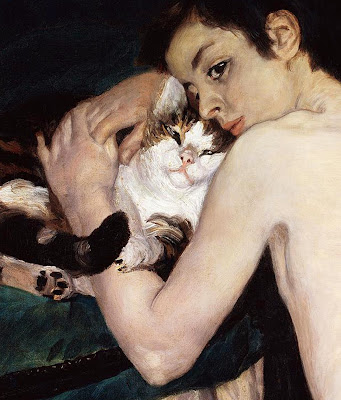 Poetry & Readings, Made to Order 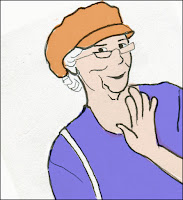 Poetry and readings designed to entertain!

Presentations are lively, the poems range from wildly humorous to the softly serious.   Some by published poets and some my own.

If there is a special day or event in the near future, my selection will focus on that topic, such as Christmas, New Year, Valentine's or Mother or Father's Day. 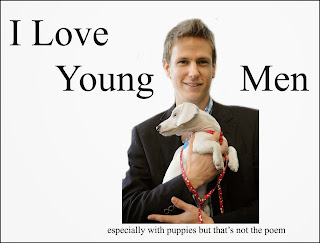 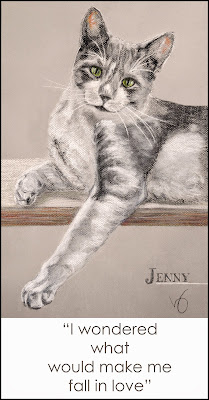 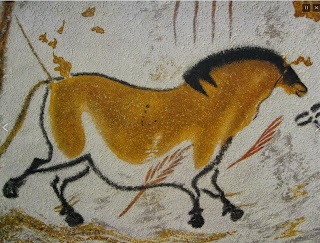 Summary
An appreciation of the horse in art and history from 35,000 years ago to the present.


Man's shared existence with the horse extends over 35,000 years and one cannot help but wonder what we would have achieved without having his strength to pull our ploughs, carry us to the four corners of the world and (regretfully) into battle.

From the Ice Age to the present he has captivated man by his physical presence, speed and strength...and he has carried man or been with him at almost every significant event since his domestication.   Most awe-inspiring is how the horse figured so superbly in prehistoric cave paintings and in carvings of exquisite anatomical accuracy and elegance:  no matter the reason, it is as if the horse helped make of us an artist and an appreciator of the beauty in the world around us.

The history of our shared existence is illustrated with art and stories telling of horses that have starred both in fact and fiction and of the humans who cared for and loved them.   The beginning of the end of the horse's use to man came a bare 100-150 years ago with the industrial revolution - and suddenly the art of impressionists falters in its admiration of his beauty and revels in the steamy thunderous vision of an 'iron horse'.  One of his last mysteries, his galloping movement, was only revealed in 1878 by another invention, photography.

A footnote:  "horsepower", a word that was coined when machines (specifically the steam engine developed by James Watt) began to replace their power is a word we still use today - but without a moment's thought as to its significance.   So next time you see or read the word - pause - and remember how this honors the strength and mobility horse gave to man from the dawn of time. 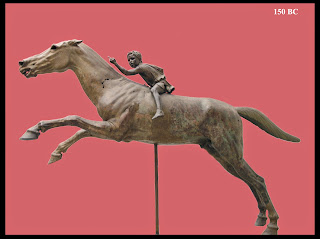 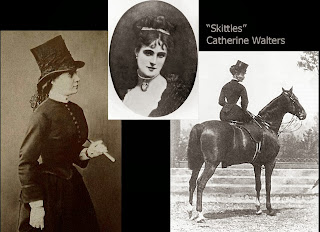 "Skittles" a woman famous for her style on a horse...and elsewhere!
Posted by liz read at 4:50 PM No comments:

The Power of Flowers in Life, Art and History 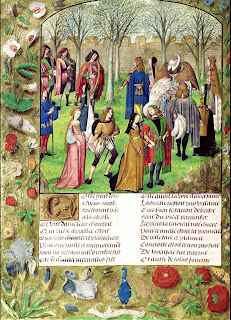 Manuscript illumination, Romance of the Rose 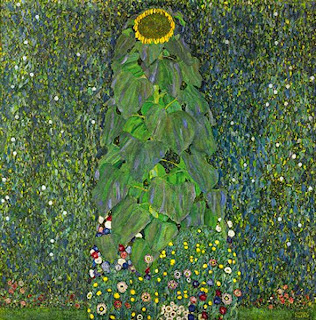 Summary
First half - an appreciation of flowering plants from botanical fact to greek myths to flowers as symbols of power... and sometimes the star in dramatic events.  Second half - "The Tulip", an extraordinary story of a flower that ravished the Middle East and Europe, its celebration by artists in the glorious still life paintings of the Dutch Golden Age and the economic debacle caused by its beauty in 17th century Holland.

The power of flowering plants in botanical fact is awesome:  think of how their life force to 'be' and 'recreate' can push sidewalks apart - and at the same time the mesmerizing beauty of their flowers.   It does you well to have respect for flowers!

Their origins lie in a time when the world's continents were one - that's fact!  However the convoluted fictional Greek origin myths deserve a look, as does the power that flowers achieved as symbols for monarchy and royalty.

And the language of flowers:  in Medieval times both in manuscripts and art, its references were often religious or highlighted chivalric values;  in Victorian times that language became more extensive and much more suggestive - especially in one portrait of a famous courtesan!

What is it about flowers and sex?  The Linnaean system of naming plants (the basis of today's nominal system) was what Linnaeus called his "sexual ordering" of plants, creating a sensation when first published since he revelled in suggestive language to describe his thesis. But not everyone was impressed: the British Encyclopedia got quite huffy: "Tsk! Tsk! No sex please, we're British!" 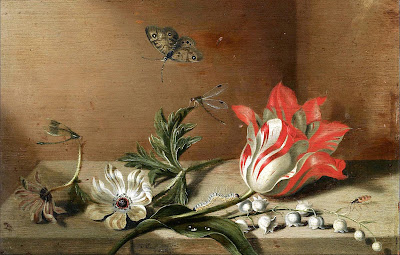 Jacob Marrell
Posted by liz read at 4:46 PM No comments: